With the group stages of the Football World Cup now complete it would seem a good time to review an interim evaluation of the success or otherwise of the teams who made it to Russia.

As a Futsal advocate its interesting to see evidence of the relationship between the two sports, and especially so when it appears to support the view that the sport of Futsal (in particular the competitive game itself) has a clear impact upon the success or otherwise of a nations Football team.

The following table presents the current World rankings for both FIFA Futsal and FIFA Football national teams. These are the national teams who compete in FIFA or confederations competitions which are eligible for FIFA ranking points so are therefore the clearest indication of a nations commitment to the sport of Futsal, played by adults in a competitive environment. This is an important acknowledgement – its the playing of the game which is relevant. 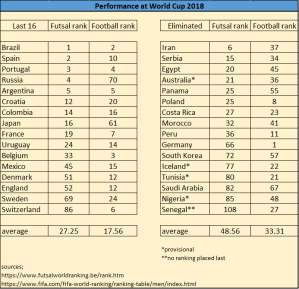 Clearly there are exceptions to a rule, but it is interesting to note that the top 5 Futsal National teams have all qualified (regardless of the manner in which they achieved the feat!) and 9 of the worlds top 20 Futsal Nations have reached the last 16.

Compare with only 3 of the top 20 Futsal Nations being eliminated. Its also pertinent that the average ranking of the successful Futsal Nations is almost half that of the eliminated sides, and almost identical to the rankings of the footballing sides similarly compared.

The football ranking of the successful group is 64% better than the Futsal ranking, and the eliminated comparison 69% – suggesting once again a direct relative comparison between the two sports.

The figures above support the suggestion that there is a direct influence to the improvement of a football society from the promotion, development and management of a Futsal structure in which the sport is played in a competitive environment. It is the game itself that is the “development tool” and not simply a series of indoor drills mimicking the outdoor coaches activity.

One final suggestion; Neymar, Iniesta, Ronaldo, Golovin, Messi and Rakitic (one player from each of the top 6 Futsal Nations) have all played Futsal in their youth and are now in their respective national football team heading in to the last 16 of the 2018 World Cup. This “Futsal Team” would be worth how much in the football transfer market right now?

Naturally the winner of the World Cup may not come from this elite Futsal group of nations; after all there are some surprises already. But these statistics would seem to suggest there is more evidence to support Futsal in the development of outdoor teams than otherwise.

Mark Potter is a former Manager of the Scotland National Futsal team. An experienced and passionate Coach and Administrator, he now works with colleagues as co-founder of Futsal Scotland, providing high level Futsal activity both nationally and internationally. For more information go to http://www.futsalscotland.co.uk